What happens when students use argument
as a way of learning and doing science?

In my first weeks of student teaching at Science Leadership Academy (SLA), I was thrilled to see a very different school setting than what I was used to. Desks weren't arranged in rows, but in pods. Walls were adorned with beautiful student artwork. Students were challenged to ask What if...  and I wonder.... And when it came time to learn, kids were actually doing science!
This was atypical for schools. In many ways, SLA diverged from the traditional model of the science classroom. Teacher-centered instruction, drill-and-kill learning, and cookbook-type labs were instead replaced with more inquiry-based methods: students acting as researchers, lessons revolving around higher order thinking skills, and teachers acting as guides rather than sages on the stage (Llewellyn 2005). SLA, putting science first in its name and inquiry first in its values, was doing science right! As my teaching mentor Tim Best said to the class, we were seeking to learn science by doing science. I loved this idea, and so did students.

However, when assessing students on their understanding, I found repeated challenges. They were successful in gaining surface-level knowledge about concepts, such as lactase being an enzyme -- but when asked further on the deeper meaning of these concepts, such as why  it's an enzyme and how to prove it, they floundered.

Probing questions such as the ones above often got similar answers: Because  you said so. Because it's in my notes. Because it's in the packet.  Or, to my ever-befuddlement... Because I've been told so by science. 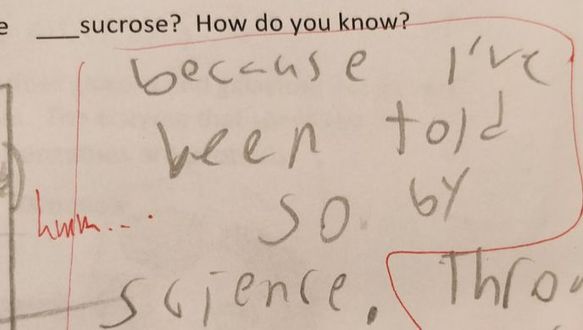 A persistent itch -- and the catalyst for my inquiry project.
​​Something was missing. Though our activities were engaging, I didn't get the sense that students were achieving all of which they were capable. They had assembled knowledge, and were given plenty of contexts to communicate it and engage in social learning (praise Vygotsky, right?) --  but their foundations were still shaky. How could I get my students to explain and argue upon their ideas more effectively? And, if our goal was to learn science by doing science, then what were the ways of doing science through which we best learn?
NEXT: The theory of scientific argumentation